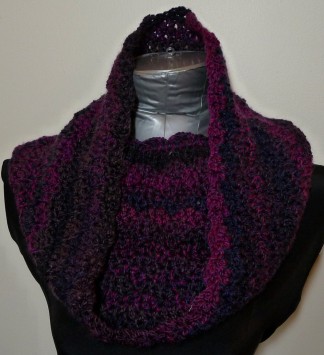 I had used this type of yarn before in another color (Seashell, see my top banner), but I found some in Orchid at Joann’s in the US about a month ago and got a couple of skeins since the stores here in Canada don’t usually carry it.  It comes in 3oz (85g) skeins that are 144 yards /132 meters long.  It is classified as bulky, but I would say it is on the light side of bulky, and calls for a size K hook.  It is two strands twisted and is self striping, graduating in colors over a fairly long span so you get a very nice striping effect.  It is nice and soft and very easy to work with. 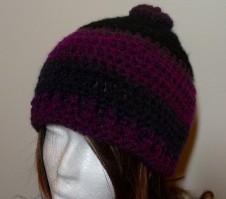 I had part of a skein left so I made a hat with that one, using plain black Charisma yarn for the top part so I would have enough of the Tweed Stripes to finish the hat off.  I used a bit to make a flattened pom pom for the top to tie in the colors.

If I find this yarn again somewhere in another color, I would probably get more as I really liked it.

I do a lot of different things. I am a horse racing photographer, I make jewelry, and I crochet. Here I will mostly concentrate on crochet. I live in Ontario, Canada, now but I am from the deep South and lived in Alabama before I moved here.
View all posts by sysclp →
This entry was posted in crochet, pattern, yarn and tagged crochet, crochet pattern, scarf, scarf pattern, yarn. Bookmark the permalink.

A record of my journey through yarn projects

A young crafty mum, parenting alone by trial and error.

Featuring the Latest Creations from Cottage Made Gifts

The domestic happenings on Rosy Hill

crochet is my favorite fiber art and my goal is to become a real artist...

The Snail of Happiness

small steps to a kinder world

Here`s a dfferent way to do Books and Novels reviews today.